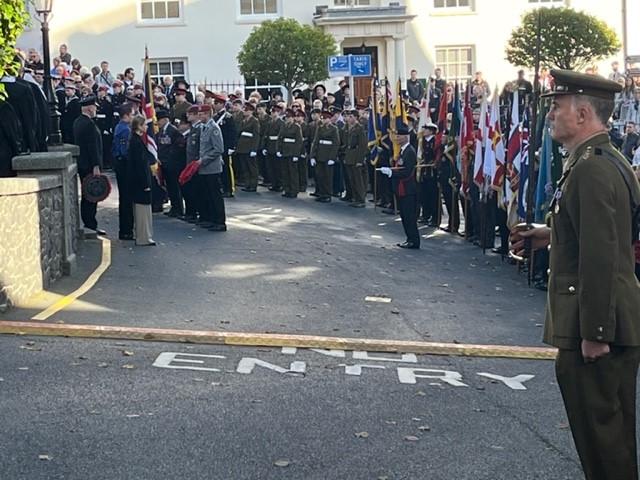 Islanders marked Remembrance Day as they always do, with a parade and laying of poppy wreaths at the War Memorial in Smith Street. They still recognise the importance of the contribution and sacrifice of the service personnel from the Bailiwick of Guernsey who stand alongside the rest of the British Isles in His Majesty's Armed Forces to protect our freedom and way of life.

The parade began at 10.35, with veterans and representatives and standards from Military organisations on the Island and the CCF from Elizabeth College. It began at the Memorial Gardens by the Fire Station and continued down to the War Memorial at the top of Smith Street. The Lieutenant-Governor, the Bailiff and members of the civic hub of the island joined the parade shortly before 11am when a bugler sounded the Last Post at 10.58 before the canon at Castle Cornet signaled the start and end of the two minute silence.

Wreaths were laid at the War Memorial by the Lt. Governor, the Bailiff, H.M. Procureur, the President of The Royal British Legion Guernsey, the Senior Member of the House of the States of Guernsey, a representative of HMS DARING, the German Contingent Officers HQ ARRC and the Constables of St Peter Port. Then followed a series of 4 hymns, the RAF hymn, the Army hymn, the Navy hymn and a general hymn accompanied by the Guernsey Concert Brass whilst all other representatives of the services and organisations on the island laid wreaths at the memorial. After the prayers, His Excellency led the group up to the Dais to take the salute as the parade marched past. There is always a good crowd to watch and the weather was chilly but sunny.

His Excellency then attended a short service at the White Rock immediately after the parade to commemorate the 34 islanders who lost their lives during the air raid on the harbour by German bombers on 28 June 1940. 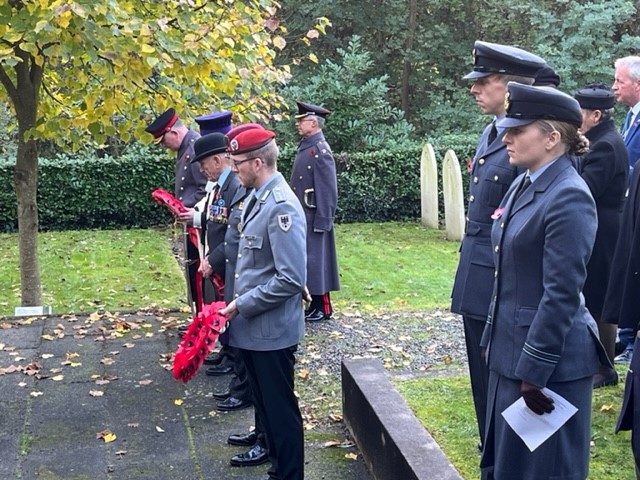 Later in the afternoon, there was another service and laying of wreaths at Fort George Military Cemetery where both German and British soldiers are laid to rest. The service aims, not just to remember those who their lives but to recognise the importance of reconciliation. Two members of the German Armed Forces were in attendance for all parts of our Remembrance Day services and the combined honouring of the lives of all nations is an important part of our international unity for the future.

Services of Remembrance took place in the smaller islands with Alderney and Sark both celebrating in their own ways.

In Alderney, there was a parade and a wreath laying at the Memorial Gardens attended by veterans, Island Services and members of the public.