On the 40th Anniversary of the Falklands War, a new memorial plaque for the Falklands War was added to the War Memorial at the top of Smith Street. It was dedicated to the memory of Peter Brouard, a member of 815 Squadron Fleet Air Arm embarked onboard HMS ARDENT, a local boy, killed in action 21 May 1982.

The plaque was unveiled by His Excellency and the Bailiff and wreaths were laid beginning with his widow, Mrs Anne Brouard followed by His Excellency, the Bailiff,  The President of the Royal British Legion, Lieutenant Commander Attwood 815 NAS and CCWEA Williams from the South Atlantic Medal Association.

The Dean did a short service of thanks and Lieutenant Commander Tim Slann, Parade Marshall read a summary of the attack on HMS Ardent.

The haunting sound of a bugler played The Last Post before a minute's silence and the laying of the wreaths.

The Lieutenant-Governor and the Bailiff spent time afterwards talking to the veterans, cadets and standard bearers on parade. 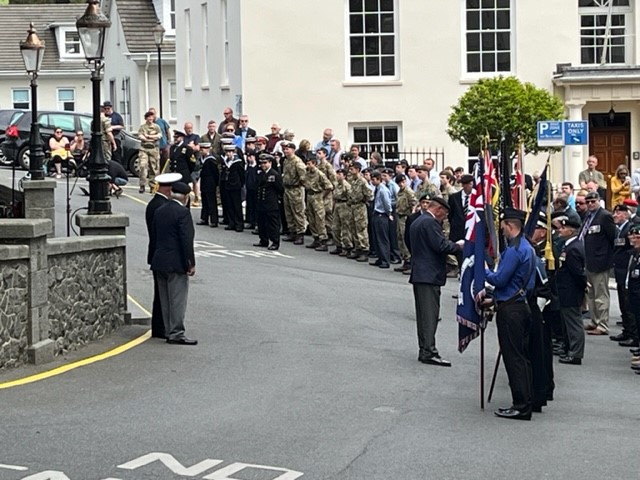