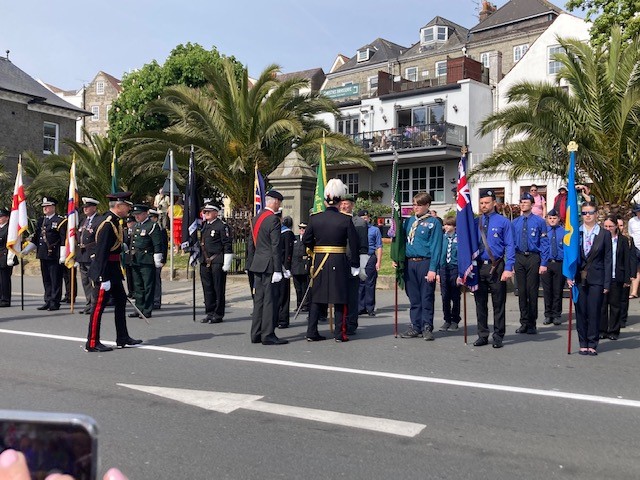 The Parade and Church service took place in St Peter Port immediately after the Bailiff laid the wreath at the War Memorial at the top of Smith Street.

The parade  involved all areas of Island Services, uniformed cadet services and veterans of the armed forces alongside visiting Gurkhas and the Chelsea Pensioners.

Four D-Day veterans made a special appearance on the island this year and joined the parade in their wheelchairs pushed by members of the cadet forces on the island.

As the first parade since 2019, the last two having been cancelled due to covid, it was not only the first for our new Lieutenant-Governor, but the first for the Bailiff Richard McMahon as well.

His Excellency and the Bailiff worked from both ends inspecting one half of the parade each and taking the opportunity to chat with those so proud to be taking part. It was a warm day without the usual northerly wind so often felt on Liberation Day and those of us watching did not envy their impressive efforts to stand for so long in the heat of the sun.

The parade then proceeded, followed by the VIP's from the dais, to the Town Church for the service presided over by the Very Reverend Tim Barker, the Dean of Guernsey.

A wonderful occasion for all.