Earl and Countess of Wessex Tour of the Islands in pictures

The Earl and Countess of Wessex came on a whirlwind tour of the Channel Islands for Liberation Day in Jersey and Guernsey on 9 May and Sark on 10 May. Alderney doesn't celebrate their own Liberation day but it being the Platinum Jubilee year of Her Majesty The Queen, they were thrilled to also receive a Royal visit on the 10 May.

The Earl and Countess arrived by plane at 1.45 and were greeted by His Excellency and Mrs Cripwell and ADC Major Marco Ciotti.

They hotfooted it to Beau Sejour with all the blues and twos and a police motorcycle escort to arrive and be greeted by the Bailiff of Guernsey who would do the introductions for the President of Education, Sport and Culture and Dame Mary Perkins before the children of Notre Dame School and the audience burst into a rousing chorus of the National Anthem. They were then introduced to the MC Rob 'Judge' Rinder, delivered Her Majesty The Queen's Message and then spent time meeting as many of the wartime Occupation Generation as the time allowed. His Excellency and Mrs Cripwell and the Bailiff were doing the rounds as well, spending time with the islanders of which they have already grown so collectively fond.

The excitement at the Tea Dance was over all too quickly before they sped off to Castle Cornet for a short ecumenical service and the Youth Service Choir treating them to Sarnia Cherie before the 21 gun salute fired by local veterans. 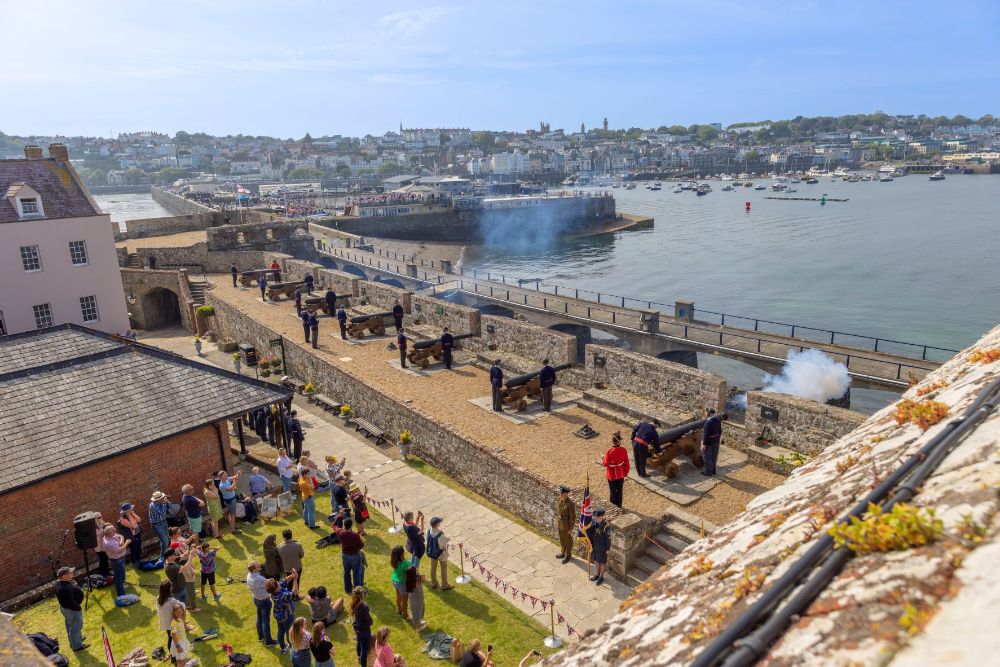 The cavalcade of over 100 Military vehicles, all bedecked with union jacks, Guernsey flags and a host of cheering islanders is often the highlight of any Liberation day and this one was no different. His Excellency and the Bailiff led Their Royal Highnesses up to the Balcony at the Yacht Club giving them an opportunity to see the cavalcade in all its glory as it came up around the Model Yacht pond. Crowds of cheering islanders lined the area and the Earl and Countess took the chance to have a chat with young, old and the countess even found a rather beautiful dog to pet.

Tea and cake at Government House and a chance for a short break followed, before a dinner st Les Cotils where many of the guests were from organisations close to the heart of the Earl and Countess.

Day two in the Bailiwick is the Forest and Le Rondin Schools, Alderney and Sark - all to follow!