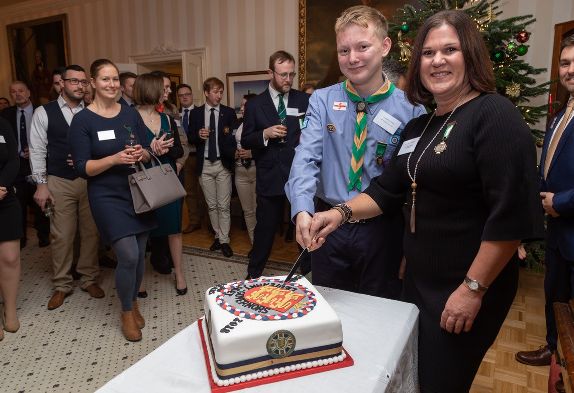 This Saturday (15 Dec) saw a unique and historic gathering at Government House when almost 50 past and present Lieutenant-Governor's cadets gathered for a reunion and to celebrate the scheme's 30th anniversary.

The very first Lieutenant-Governor's cadets were sworn in in 1988 when the then Lieutenant-Governor Lieutenant-General Sir 'Sandy' Boswell, decided he wanted a mechanism better to connect Government House to younger people in the Bailiwick and also to recognise exceptional young people from the uniformed youth organisations of the time.

The scheme has been in continuous operation since, with around 4-6 young people normally towards the end of their school careers, selected each year to become part of the Government House team and assist His Excellency with his official duties. Over the years cadets have helped with the conduct of numerous visits by members of the Royal Family and other senior dignitaries, as well as Queen's Birthday Receptions and other official entertaining, and many ceremonial functions around the Island. They have made an invaluable contribution to public life in Guernsey.

The evening saw several of the very first cadets return, one of whom, Mrs Tracy Driscoll, joined forces with one of this year's Cadets, Jonathan Charmley to cut a very special birthday cake.

Messages of congratulations were read out from several past Lieutenant-Governors, including General Boswell, and the evening was also attended by the Bailiff Sir Richard Collas, and his predecessor, Sir Geoffrey Rowland, both of whom have been very strong supporters of the scheme.