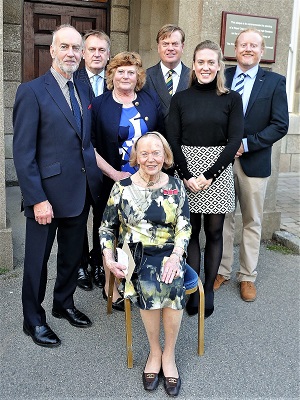 Mrs James received the BEM in the 2018 Queen's Birthday Honours list for services to sport and the community in Alderney. Around 80 people witnessed the ceremony in the Island's Anne French Room including Mrs James's daughter and three sons, who had travelled across from the UK to be present.

The investiture began with the President of the States of Alderney, Mr Stuart Trought, paying tribute to Mrs James for more than 30 years of enthusiastic and wide ranging service to Alderney, including provision of sports opportunities and facilities for Ridunians of all ages. His Excellency then presented Mrs James with the British Empire Medal on behalf of Her Majesty The Queen.

Guests then had an opportunity to congratulate Mrs James during a vin d'honneur, hosted by the President of the States of Alderney.