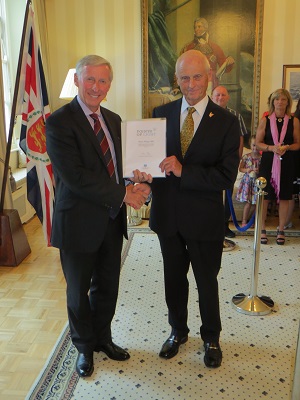 The first person in the Bailiwick has been formally recognised by the UK Prime Minister for their outstanding contribution to the community, as part of a nationwide scheme.

Retired Guernsey surgeon Mr Roger Allsopp is the 977th person in Britain to be named as a Point of Light. This Tuesday (14th Aug) His Excellency presented Mr Allsopp with a personal certificate signed by the Right Honourable Teresa May MP, during a ceremony at Government House attended by island officials as well as Mr Allsopp's family, friends and colleagues.

Points of Light are outstanding individual volunteers: people who are making a change in their community. Every week day the UK Prime Minister recognises an inspirational volunteer with the Daily Point of Light award.

First established by President George H. W. Bush in 1990, over 6,000 US Points of Light have been recognised in the USA. UK Points of Light was developed in partnership with the US programme and launched in the Cabinet Room at 10 Downing Street in April 2014.

Since then 976 people have been named Points of Light by the Prime Minister, highlighting a wide array of innovative and inspirational volunteering across the length and breadth of Britain.

Doing everything from tackling knife crime, to supporting families of dementia patients, UK Points of Light are described as 'fundraising, awareness raising, problem solving heroes who all had an idea that they decided to make a reality'. Their actions have changed lives and their stories can inspire thousands more to get involved or start their own initiatives.