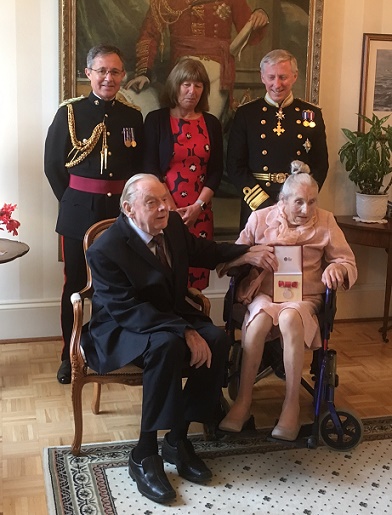 A long-serving local volunteer has been presented with the British Empire Medal (BEM) in a formal ceremony at Guernsey's Government House on Tuesday 14th November 2017.

Mrs Beatrice Webber was awarded the BEM in the Queen's Birthday Honours List for 2017, for services to the blind in Guernsey.  She received her medal on Tuesday from the Lieutenant-Governor, watched by her family, friends and colleagues.

Mrs Webber has consistently provided invaluable support to partially sighted islanders since 1978, in the form of audio news. Her consistency and devotion are remarkable, and have undoubtedly enriched the lives of all those who have used the service over almost 40 years.

The British Empire Medal is awarded for meritorious service worthy of recognition by the Crown. It is the most significant award that is presented here at Government House.