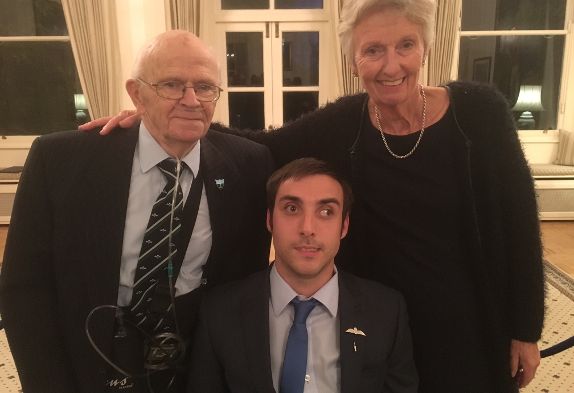 Anyone who knows Guernsey's towering south coast would probably not choose to launch themselves from it. But that's exactly what one islander does for fun, as often as he can - and in a wheelchair.

Adrian Vidamour is the Bailiwick's first qualified wheelchair paragliding pilot, who received a sterling silver wings badge from the Lieutenant-Governor in a ceremony at Government House last night (26 Sep). The presentation was watched by Adrian's family, friends and fellow paragliders, including Alfred Lainé, founder and President of the Guernsey Paragliding Club, the driving force behind the idea to open up the sport in Guernsey to wheelchair users.

A local charitable foundation introduced Adrian to Alf, who wished to teach a local wheelchair user to fly a paraglider. After much work and extensive fundraising, Adrian commenced his training in 2015 and qualified as a pilot one year later using a specially designed wheelchair.

The ceremony was also watched by Sarah Bamford, founder of local charity GO, who was Adrian's specialist nurse when he was diagnosed with cerebral palsy at 18 months.  They have remained firm friends ever since and Sarah was delighted to witness Adrian's 'wings' ceremony last night.