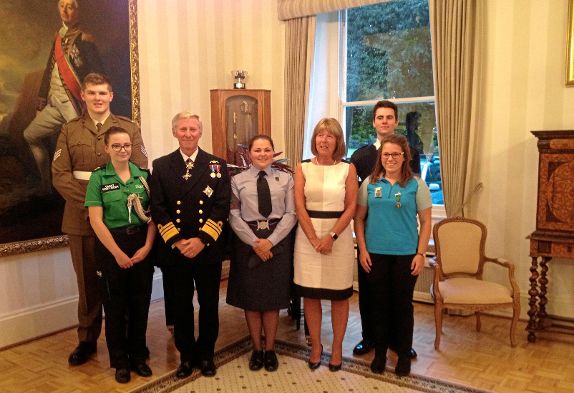 On Wednesday this week (13 September 2017) His Excellency presented specially commissioned medals to five young islanders at Government House, in a ceremony to mark their appointment as Lieutenant-Governor's Cadets for 2017-18.

All five recipients are members of local uniformed youth organisations. The first to receive her medal was Lydia Batchelor, a Grammar School & Sixth Form Centre student and Leading Cadet with St John Ambulance, who represented Guernsey in the 2016 National First Aid Finals. She was followed by fellow Sixth Form Centre student Elise Bott, who is a Young leader in the Guides attached to the 8th St Matthews Brownies.

The first of two Elizabeth College students to receive their medals was Petty Officer Ben Brown, a member of the school's CCF who attended a Royal Navy Cadet Leadership Course this summer, in Dartmouth. He was followed by Sergeant Rory Johnson of the CCF Army Section, who coaches shooting and teaches drill. The final recipient was Corporal Amy Woodland of 201 Overseas (Guernsey) Squadron, Air Training Corps, who is also the first female cadet to become a member of the Elizabeth College CCF.

The new cohort of Lieutenant-Governor's cadets will be the first also to serve as members of The Youth Commission for Guernsey and Alderney's Youth Forum. The Forum is a group of young people from across the Bailiwick that represents the views of their peers and issues important to young people in the Island. The decision to admit them to the Bailiwick's representative body for young people was taken by current members at a meeting of the Forum.

The ceremony was watched by the cadets' families, together with the Bailiff, the President of the Committee for Education, Sport and Culture, and the CEO of the Youth Commission for Guernsey and Alderney.

For more informantion on the Lieutenant-Governor's Cadet scheme in Guernsey follow this link.