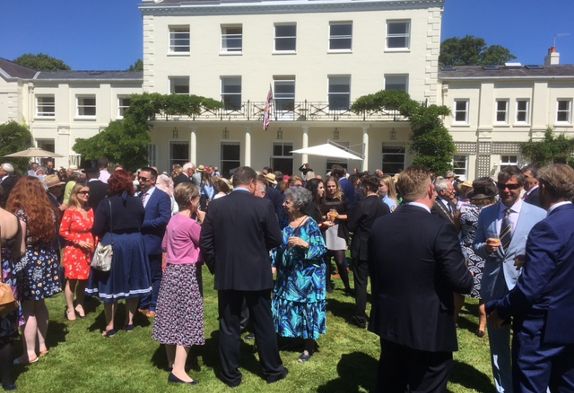 This Saturday (17 Jun) saw The Lieutenant-Governor and Lady Corder host Government House's annual reception to honour the official Birthday of Her Majesty The Queen.  As well as The Bailiff, members of the Royal Court, and members of the States, guests were invited from all areas of Bailiwick life (such as the public services, the clergy, island charities and organisations, and private businesses) to join Sir Ian in the loyal toast.  This was raised at midday to the sound of a 21-gun salute from Castle Cornet.

In his remarks, Sir Ian paid tribute to Her Majesty's timeless qualities of dedication, commitment, and loyalty to her Dominions, and to the constant reference point which she continues to provide in an increasingly turbulent and unpredictable world.

He also led a toast to His Royal Highness Prince Philip, The Duke of Edinburgh, as he approaches the end of his formal programme of public engagement. 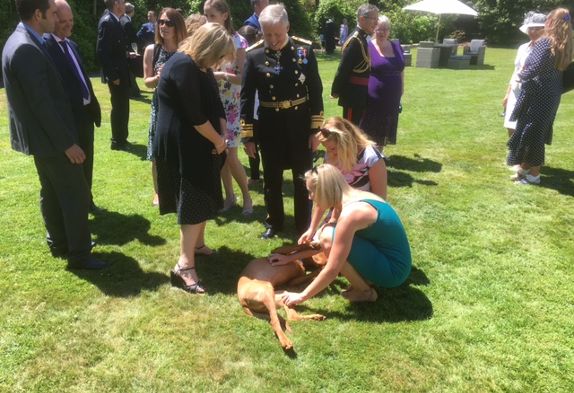 His Excellency remarkes that this has been a bumper year for the Bailiwick reflecting the huge amount of good work done by islanders for each other.

Music for the day was provided by the Schools' Music Service Youth Wind Band and Training Jazz Band, which both played magnificently adding a real sense of fun to the occassion.  His Excellency was also assisted in the presentations by his four Lieutenant-Governor's cadets, Ross Senior, Leah Moore, Hannah Belton, and Peter Morley.

Finally, of course, Sir Ian and Lady Corder's dog Milo put in a special guest appearance at the end of the event - stealing all the attention as usual!