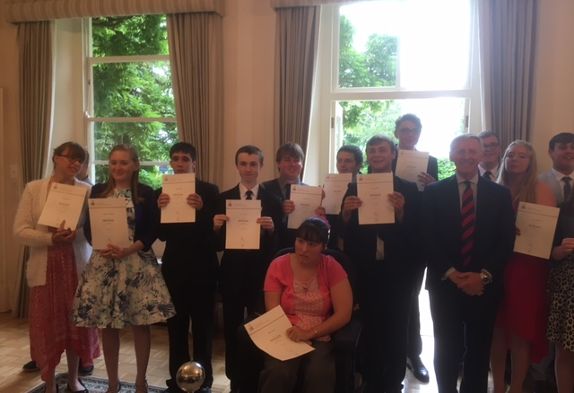 At a special ceremony last Wednesday evening  (7th Jun) at Government House, His Excellency the Lieutenant-Governor presented 20 pupils from Le Murier School with the Bronze Duke of Edinburgh Award.

To achieve their awards, each of the school children had to have completed community service tasks, learnt a new skill (such as powerboating or climbing) and undertaken a special expedition, either on Guernsey or in the New Forest, where they learnt planning, navigation, teamwork, and how to look after themselves in the countryside.

In presenting the awards, Sir Ian paid tribute to the Island's DofE organisers and instructors, the teachers at Le Murier, and the parents of all the recipients for all the support they had given.  He said he 'hoped that working towards the awards had given the children confidence in their ability to achieve whatever they wanted to' and that 'they should be very proud of what they had accomplished'.