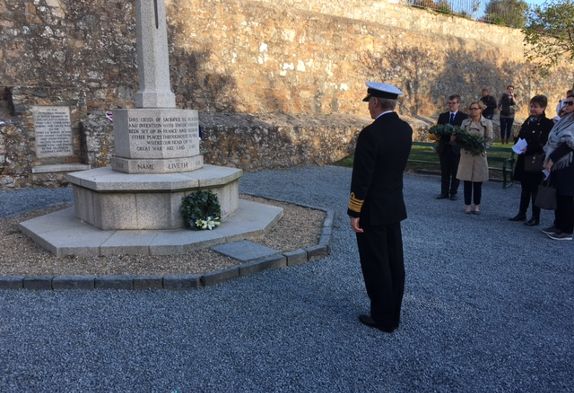 On a bright but very cold morning today, Tuesday 25th April, the Lieutenant-Governor attended a commemorative service for ANZAC Day at the Fort George War Memorial.

ANZAC Day marks the World War I landing at Gallipoli, and remembers the sacrifice made by Australians and New Zealanders, and the generations of men, women and children who have died in the cause of liberty and peace. Also present were the Bailiff and the Dean, and the Service was led by the Reverend Karen Dack.

During the Service, His Excellency addressed those gathered and readings were given by Ben Johnson and Luca Withoos, who both read excellently.  Lydia Pugh added to the poignancy when singing Amazing Grace during the laying of wreaths. There were three official wreaths laid, plus a traditional Kiwi one made of rosemary. The Last Post and Reveille were played by Matt Bourgaize, Bugler.

Sir Ian commented that a very unusual addition to the proceedings was the singing of the New Zealand National Anthem, in Maori, by the Reverend Tim Dack - not something witnessed very often on these shores before 0730 on a Tuesday morning!

The atmosphere was exceptionally moving, albeit less formal than the Remembrance events which take place across the World in November each year.

Finally, a big thank-you to Mr Dennis Le Moignan and the St Peter Port Constables for laying new gravel in the area in preperation for the event and to Mr Paul Boazman for his delicious bacon rolls, tea, and coffee at the end of the commemoration - very welcome indeed given the cold north wind!