On Thursday evening, 30th March 2017, His Excellency and Lady Corder were treated to a private viewing of the wonderful work of Peter Le Vasseur and His Excellency went on to officially open the artist's latest exhibition, entitled 'Consequences'. 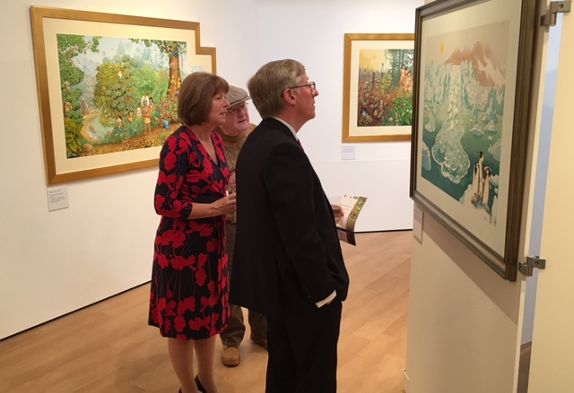 Peter Le Vasseur is one of the Island's leading and foremost artists and this is the first time he has exhibited locally for some 12 years.  The Lieutenant-Governor and Lady Corder were very impressed with the work on show, His Excellency describing the collection as 'vivid and thought-provoking ....... everything that art should be!'.

The artist's paintings indeed depict strong images, often linked to environmental themes, and are characterised by their intricate level of detail.  During the 1960s, Peter sold paintings to the Beatles, Rod Steiger, Jerry Lewis, the Duke of Bedford and Lord Porchester, and David Puttnam acquired a commission to produce a series of paintings for The Sunday Times and the National Film Archive.  In 1993, Peter was the first artist to win an Earthwatch Scientific Foundation Fellowship, enabling him to document the flora and fauna of the rain forests of South America.

The exhibition was hosted by the Guernsey Arts Commission at the Greenhouse Gallery in Candie Museum, and was also attended by the Bailiff any many Deputies.