The Lieutenant-Governor and Lady Corder spent Thursday afternoon (23 Mar) visiting the offices of Guernsey Post where they were introduced both to the complex business of running a modern postal delivery service as well as the more creative elements of philatelic design. They were hosted by Boley Smillie (Chief Executive), Andrew Duquemin (Chairman) and Mrs Dawn Gallienne (Hd of Corporate Engagement). 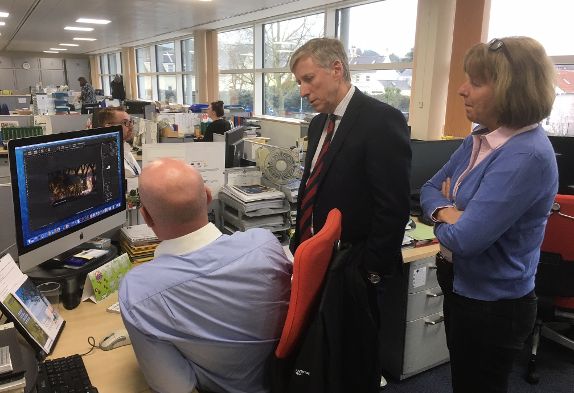 During their tour they were briefed by Bridget Yabsley (Head of Philatelic) and Mark Totty (Philatelic Production Manager) on the process for choosing new designs for both Guernsey and Alderney commemorative stamp issues as well as some of the artistic techniques involved.  They were also shown some innovative features of modern stamp production including the potential to link new stamp issues to internet based multimedia products such as videos providing further background on subjects featured on the stamps themselves.

Sir Ian and Lady Corder were then shown around the sorting rooms talking with staff and meeting 'Terry' and 'Barry', Guernsey Post's new state of the art letter sorting machines.  Each is capable of sorting 40,000 letters an hour! The machines were named after twins who both worked for the business as cleaners.

On departure Mr Smillie presented His Excellency and Lady Corder with a framed commemorative stamp issue together with a pair of 2016 stamp year books.