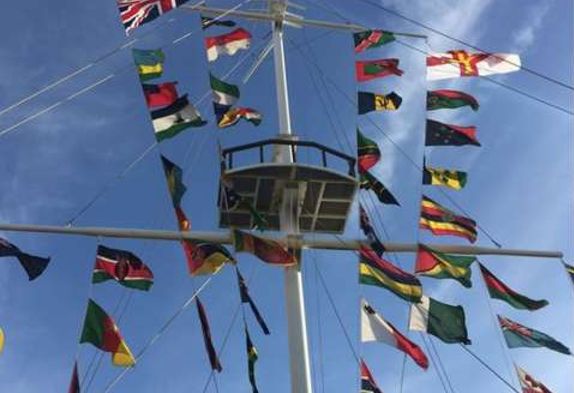 The group gathered to read together a specially written Commonwealth Affirmation before His Excellency was invited by Mrs Clare Parkinson, President of the Royal Commonwealth Society Guernsey Branch, to hoist the Commonwealth flag to the top of the 100ft (30m) Sea Guernsey mast.

The large blue and gold Commonwealth flag topped a display of all 52 national flags of the Commonwealth, flying from the replica ship's mast that is based on the mizzenmast of a 74-gun vessel seen in waters around Guernsey in the 19th Century.

Sir Ian then joined members of the Society for breakfast, at the Urban Kitchen. His Excellency delivered The Queen's Commonwealth message, which featured the theme of a peace-building Commonwealth. The message also highlighted the benefits member states of consensus and cooperation.  The full text is at the following