Each year around four or five young people from Guernsey's uniformed youth organisations are selected to serve as Lieutenant-Governor's Cadets.  They play a special role in supporting The Queen's Representative at official and public functions throughout the year.

The Cadets are chosen each summer and are appointed in September, to serve for one year.  Young people aged between 15 and 18 years old on 1st September are invited to apply.

This years cadets are: 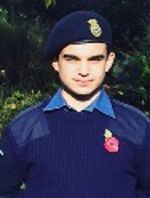 Jacob is 17 years old and Senior Cadet in the Royal Navy Section of the Elizabeth College CCF, whose natural leadership and contagious enthusiasm saw him promoted early to Chief Petty Officer. He is well organised, overseeing all RN cadet training and the section's adult volunteers say that their lives are much easier thanks to Jacob's weekly training plan and his liaison with the Guernsey Sailing Trust, getting cadets out on the water and working towards RYA sailing qualifications. He also produces all Cadet promotion certificates.

Jacob always leads by example, with energy, good humour and exemplary turn out. He is a confident and effective communicator, equally happy talking to his peers or to senior visitors from the cadet organisation.

But Jacob's passion is the sea and he is closely involved with the Guernsey Sailing Trust as an instructor. He holds no fewer than 17 RYA qualifications in both power boating and sailing, including Dinghy Instructor and Advanced Racing, and is working towards Powerboat Instructor.

Jacob volunteered frequently during his summer with the Guernsey Sailing Trust to help young people from groups such as Autism Guernsey, Guernsey Disability Alliance and Youth Justice to get out on the water - very often for the first time. He was also fortunate to meet and talk to the British Paralympic Sailing Team. Jacob also crews on a local commercial vessel and has logged over 250 hours of sea time.

Jacob is also the School's sound and lighting engineer. He sets up all the equipment for school productions and student discos, and is actively training his successors. He also assists with GADOC productions.

All this keeps Jacob pretty busy but, in what free time he has, he enjoys climbing and abseiling, and has so far scaled seven peaks in Snowdonia.

Emily is 16 years old and a student at the College of Further Education, where she is studying Level 3 Childcare. She joined the 3rd Guernsey as a scout and seized the many opportunities offered to her. She went on to become a senior patrol leader and, after gaining the Chief Scout Gold Award, started the training to become a Scouting Young Leader. She was determined to complete this syllabus, which included a residential weekend, as well as leading aspects of the cub meeting. To her credit she gained this award in less than a year.

Emily is very reliable and a true all-rounder, and has participated in cub camps as a leader. Last year she organised a team of young leaders and ran an activity that she had devised, for more than 200 cubs. She has been involved in sporting activities, craft and teamwork, as well as arranging speakers to help out at meetings. Emily was a key member of the Scouts' environmental team that earned two island awards: planting trees, creating a sensory garden and making bird and insect boxes.

Each week Emily gives her time freely, as well as at weekends, and has helped out during the summer holidays as a Leader at the annual 10-day scout camp. She is described as having a delightful personality, a real can-do attitude and a conscientious and caring nature. She is prepared to have a go at all the many things that the Scouts do, and particularly enjoys finding creative solutions to problems.

Emily is also described as an extrovert; with a talent for talking to people she doesn't particularly know, on subjects about which she is passionate. Her nomination to become a Lieutenant-Governor's Cadet stressed how well she had responded to leadership training, growing in maturity and self-confidence to become a valued member of the team.

It is Emily's ambition to become a qualified Primary Schoolteacher.

Jack is 17 years old and a student at the College of Further Education. He has been a loyal member of the Sea Cadet Corps since 2012.

Jack is one of the two Cadet Corporals who are TS SARNIA's senior cadets, commanding the Royal Marine Cadet Detachment. He works tirelessly with his contemporaries to raise standards and to boost recruitment. His maturity, bearing and personal drill are described as a great asset to the Unit and a role model to newer members.

Jack has seized many of the personal development opportunities that the Corps has offered, increasing his self-confidence by attending Promotion Boards to lead new recruits. He has remained steadfast and loyal to TS SARNIA's Royal Marine Cadet Detachment; even through the difficult times when numbers dropped, only to rise steeply - all while changing premises frequently. He is described as a natural leader, able to make quick decisions under pressure.

Although drawn to the "Green", soldiering side of the Sea Cadets, where he excels at skill-at-arms and field craft, Jack has also developed his nautical skills by achieving RYA Level 2 Powerboating and YSS Stages 1 and 2 in Sailing. Through the Sea Cadets Jack has gained a BTEC qualification in Teamwork, Personal Skills and Citizenship in Youth Organisations. The Corps has also enabled him to complete both his skills and physical sections of the Bronze Duke of Edinburgh Award, with his secondary school.

Jack enjoys sharing his knowledge and skills with new cadets. He has made a vital contribution to the Detachment during the Annual Field Craft Assessments, and will be a key player in Jersey, for his year's Assessment.

Jack gives much of his free time to the Unit, volunteering for many events, including flag days. Outside of TS SARNIA, Jack is completing a BETEC Level 3 Diploma in Public Services at the College of Further Education.

Like many fellow Royal Marines Cadets, Jack works weekends at Le Friquet Garden Centre, although the staff of TS SARNIA are mystified as to how any of them finds the time. It is Jack's ambition to join the Armed Forces in the not-too-distant future. 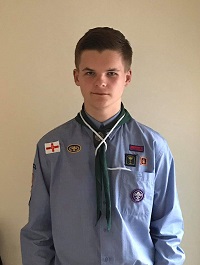 Jack is 16 years old and also a student on the Public Services course at The College of Further Education. He has been with the 1st Guernsey Scouts for 10 years: as a Beaver, Cub, Scout and now Young Leader. He leads with gentle confidence, commanding respect from scouts, leaders and parents alike. He is described as a mature, caring and responsible young man, who is much appreciated as a committed and reliable member of the leadership team.

Jack has developed many skills through scouting, and shows patience and kindness when sharing his knowledge with the younger members. His particular talent is traditional bush craft, as well as shooting and kayaking, where he has worked hard to progress and gain experience. He plays a key role helping senior instructors to run paddling sessions and has gone out of his way to help other scout and cub groups.

Jack's leadership potential was evident at an early age, proving himself to be considerate, conscientious and sensible. As a Senior Patrol Leader he became concerned for younger scouts experiencing bullying at school, and lead a group forum to help them: a typical example of him listening, acting and supporting. He led a fruitful discussion which helped those involved. This compassionate side to his character is always evident in his work with individuals and groups.

Jack wears his uniform with pride and has represented the 1st Guernsey Scouts and Island Scouts on several occasions: as flag bearer on St George's Day, on Remembrance Parade and at the Queen's Birthday reception here at Government House. He received the 2019 Rotary Young Leaders' Award and attended a youth leadership course in July, along with other winners from across the UK.

An accomplished trumpet player, Jack was also a longstanding member of St Sampson's School Orchestra, the school jazz band, Stage Sounds and the Guernsey Concert Youth Band. He has competed in the Eisteddfod and performed at charity fund raising events and in care homes.

Jack also enjoys shooting. He is the youngest member - by some margin - of the Guernsey Pistol Club, with a particular interest in WW2 weapons. He has worked at weekends since the age of 14: currently at Marks & Spencer on Saturdays and in the holidays.